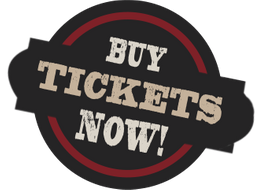 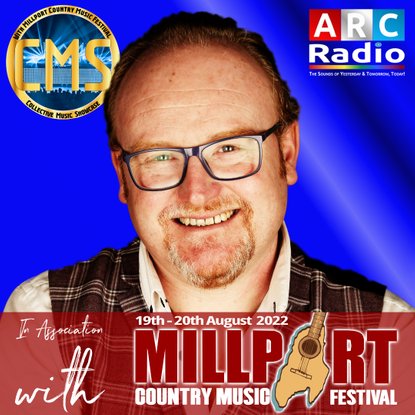 Millport Country Music Festival is delighted to announce that Modern Age Music Roots will be joining forces with the festival by taking over the Cactus Jack’s stage for the afternoon of Saturday 20thAugust 2022. Headlining this segment will be Sarah Darling, joined by One Trick Pony, Georgia Nevada and Megan Rose.

This announcement enables us to confirm the full line-up for the festival, as you will see from the attached poster.

37 artists will appear on five stages at this year’s Millport Country Music Festival, of which 11 will be from the US, 11 Scottish and the remainder from the rest of the UK and Ireland, representing a huge range of the country, americana and roots genres.

Maverick Acoustic Stage will return, headlined on Friday 19thAugust by Candi Carpenter with Robert Vincent, Jessie G and Sandy McLelland also appearing that evening, while on Saturday, Chris Mossop, Emma Moore, Chase Stapleton, Roseanne Reid, Arbor North, Kezia Gill, Kevin McGuire and Songbyrd will lead into the finale of Gary Quinn & Friends Acoustic Jam, which will feature many of the artists on the island for the weekend. 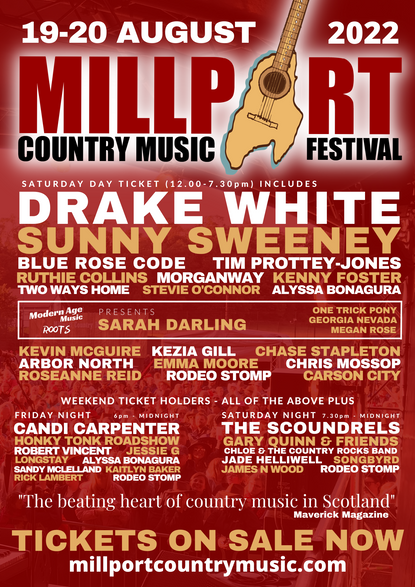 Starting off the performances in Cactus Jack’s on Friday 19thAugust will be Nashville’s Kaitlyn Baker, with Longstay and Alyssa Bonagura Band leading up to Honky Tonk Roadshow to close out the Friday night party. On Saturday evening, Jade Helliwell, Chloe & The Country Rocks Band and The Scoundrels will ensure that the audience will be bouncing until midnight.

Our line dance venue, Dance Ranch, will play all weekend, led by Rodeo Stomp and featuring performances by festival favourites Rick Lambert, Carson City and James + Wood, giving experienced and new line dancers the chance to shuffle those feet right through the festival.

Weekend ticket holders will be able to choose from all of the above while Saturday Only tickets will cover noon until 7.30pm and enable holders to enjoy 23 artists during that period. Calmac will be providing an extended service over the festival weekend including late ferries, thereby enabling Saturday Only ticket holders to have plenty of time to get back to the mainland following Drake White’s performance.

Millport Country Music Festival is located in the grounds of Garrison House, right in the centre of Millport itself on the Isle of Cumbrae, less than an hour west of Glasgow.  There will be great eating, drinking and shopping options for festival goers within the festival grounds and elsewhere in the town. A regular bus service will transport those patrons not coming in cars from and to the ferry slip.

Weekend and Saturday Only tickets, details of camping and glamping are available now at www.millportcountrymusic.com